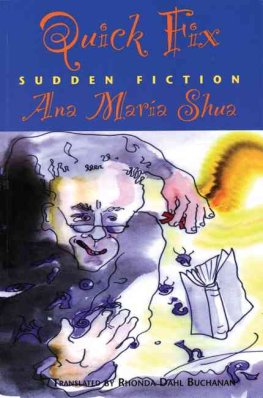 Twenty years ago, as G.S. Evans and I were distilling and defining our ideas about irrealism and putting together a first issue of The Café Irreal, I happened upon issue No. 44 of The American Voice, which contained stories and poems by Latin American and Spanish women writers. Because we had decided to use the tagline “International Imagination” for our publication and because many of these stories fit nicely within our concept of irrealism, we read this magazine with great interest. We felt a special attraction to “Twelve Short-Short Stories” by Ana María Shua, an Argentinian writer whose novels, children’s books, and collections of short fictions have won prestigious prizes, both in her home country and internationally.

A few years later, after The Café Irreal was well underway, we contacted translator Rhonda Dahl Buchanan and asked if she had other stories by Shua that we could publish. She kindly forwarded for our consideration ten short pieces under the title “A Selection from Other Possibilities,” which appeared in Issue #6.  And in our next issue we were able to  publish, under the title “A Selection from Botany of Chaos,” the “Twelve Short-Short Stories” that had appeared in The American Voice. Surprisingly, there are only eleven short pieces in that selection, a fact which contributes to the satisfyingly irreal nature of this group of microfictions.

In general, I find that there’s something about a very, very short piece of fiction that gives the impression of irreality, even if the story is told through realistic details. Stories by Lydia Davis come to mind (see, for example, “Spring Spleen”). Much of Davis’ fiction seems realistic in intent and tone, yet in a story this tiny there isn’t enough descriptive space for a setting, for characterization, for metaphors and symbols, and this in turn undermines the reader’s expectations of the work a story should do. The fact that the writer has only hinted at meaning and narrative and we readers must do so much work of our own forces us to use our imaginations more than usual, even when the story is realistic. And, therefore, when the writer intends something less realistic, as did Kafka in many of his parables and other short fictions (see, for example, “Before the Law”), the effect can be intensely irreal. This is also, in fact, the case with Ana María Shua’s work.

In 2008 when Rhonda Buchanan published a volume of her translations of Shua’s microfiction under the title Quick Fix: Sudden Fiction, she graciously sent us a copy. I decided to re-read it as a part of Our Year of Reading at the Irreal Café. Quick Fix is divided into four sections, which correspond to Shua’s four extant published volumes of short shorts at the time this book went to press. Each section has an informal theme – “Dream Catcher,” for example, deals with sleep, dreams, and insomnia – but all contain tiny histories, concise philosophy lessons, miniscule news stories, and reimagined fairy tales. In addition, many of Shua’s stories work as epigrams and humorous adages, giving us some sly wisdom and a refreshing amount of wit as well. And each story is included in the original Spanish, which enables us to see quite clearly Rhonda Dahl Buchanan’s skill as a translator.

When I first read the selections from Other Possibilities which we published in Issue 6 (and which are included in Quick Fix, with some changes in text and/or title, in the “Geisha House” section), I was delighted to see that all of them related to the theme of writing and reading. In “The Author and the Reader” a writer is asked by a journalist if he thinks about the reader when he writes, and though the author thinks of nothing else, thinks of the reader “as a prince clothed in dazzling, embroidered fabrics,” and so much more, he says that he does not. The conclusion of this little interview is an unexpected glimpse into the writer’s mind that is both humorous and poignant. “Four Walls” shows us something about a writer’s isolation through a claustrophobic sort of geometry. In “Unlucky Robinson” (which appears in Quick Fix as “Unfortunate Robinson”) we learn that a shipwrecked writer would have preferred to build his novel out of “some nails, maybe even a collection of pipes, or a few simple wooden planks,” rather than the “soaked paragraphs” and “metaphors encrusted with barnacles and mussels” that the sea has delivered to him. In “Literary Workshop I” a writer’s stories are found to be demanding, unruly, and voracious. In “Respect for Genres” a man who wakes up next to a woman he doesn’t recognize must find a way to fit his story into the appropriate genre or risk remaining unpublished. (These last two stories, among others by Shua, appeared in our 2013 anthology, The Irreal Reader: Fiction and Essays from The Café Irreal.)

Quick Fix is filled with ingenious line drawings by Luci Mistratov, and the cover bears a color-washed depiction of a man who might be a letter hunter from the tiny story “Run for Your Lives!” The other drawings show us bits and pieces of the universe Shua has created, including fused lovers, the menacing sight of clothing on a chair, a girl transformed by words, the varieties of ties that bind, a rabbi making what might be tiny Golems, a waiting room after patients have exchanged symptoms, and many others. These drawings do not violate Kafka’s injunction that nonrealistic stories shouldn’t have realistic illustrations (http://www.openculture.com/2015/10/franz-kafka-says-the-insect-in-the-metamorphosis-should-never-be-drawn.html) but instead they riff on and complement the tiny stories they accompany as they contribute to the overall irreal effect.

Because Shua’s stories are so small and yet so complex and imaginative, Quick Fix was truly worth a second reading. In fact I’m sure that it would bear up under repeated readings, yielding new variations of its diverse meanings and imagination-taxing pleasures again and again. As Rhonda Buchanan notes at the end of her introduction to the volume:

Those who are addicted to reading know that oftentimes it is impossible to put a book down once you open it. Ana María Shua is certainly aware of this danger, and once remarked about her book Casa de geishas that it was her intention to set a more subtle trap for her readers, one that would entice them to return to the pages of her book time and time again, at the risk of becoming entangled forever in the web of her intrigue.

There is almost something irreal about how well these challenging little pieces stand up under such intense scrutiny. Happily, you can still get Quick Fix online at Wordery.

This cafe is a place for irrealistas to find out more about irrealism and The Cafe Irreal, a webzine that's been online since 1998. View all posts by irrealcafe

This site uses Akismet to reduce spam. Learn how your comment data is processed.

Read Fiction and Essays at The Cafe Irreal

Check out The Cafe Irreal for more about irrealism and to read great fiction and essays.